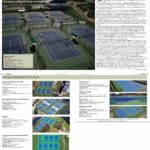 The majority of the nine outdoor hard-court winners of the Tennis Industry/ American Sports Builders Association distinguished Facility-of-the-Year Awards for 2014 are located in the eastern part of the country, with one in Tennessee and one in Arizona. Two of the projects used a post-tensioned concrete base, while the rest are asphalt.

The six asphalt courts, in two abutting batteries, at Bishop Feehan High School in Attle¬boro, Mass., were about 20 years old and had significant cracking. After the fence, net posts and concrete footing were removed, the asphalt was pulverized and blended with base materials to a depth of about 8 inches. The asphalt surface was installed in two courses and a new fence was installed during the curing time.
The owner provided a basic sketch and concept for the upgraded Gene Clayton Tennis Center at Methodist University in Fayetteville, N.C., then the contractor filled in the specs and design details and oversaw demolition of the old courts and construction of the new facility. Because the base stone under the existing courts was insufficient, the asphalt was pulverized then 4 inches of new stone was added to provide a stable base. The new courts, which also have lines for Youth Tennis, are home to the university’s Professional Tennis Management program.

When work began on redoing the eight courts at Prince George’s Community College, it was discovered that the original courts were built without a stone base. After a quick meeting, the contractor came up with a cost-effective solution to refurbish the courts, which included filling existing cracks, installing paving fabric then 3 inches of stone dust, adding asphalt, then the acrylic color system. The results, achieved through assistance from the USTA, are seven new 78-foot courts and two 36-foot courts. Since the opening of the new facility, the college will have a new tennis team and host multiple events, including Youth Tennis events.

The project at Regency@Monroe in New Jersey resulted in six new cushioned hard courts, complete with lighting, court cabanas, walking paths and more. To improve drainage at the site, a new French drain was installed with decorative stone on top.

The site for the new tennis facility at Richard Stockton College in the New Jersey was virgin woods and needed to be cleared of oak and pine trees, then clay-like material had to be excavated and disposed of, and the site was backfilled with stable material, all while fighting heavy rains. But the result is a new college facility with two batteries of three and four courts each, plus a stadium court with spectator seating. The courts are all connected by a series of 8-foot-wide walkways.

The three asphalt courts at Troon Country Club in Scottsdale, Ariz., had structural and age is¬sues; the courts had been covered with a rolled turf system and acrylic infield system that was failing. A full demolition and redesign was not feasible, so the contractor designed a post-tensioned concrete overlay system. One major obstacle was the elevation changes—existing grate drains had to be removed then reinstalled to match the higher elevation, as did light poles, junction boxes and gates. New pavers were installed at each court entrance to match the new heights.

The two new courts for the varsity tennis team at the private University of the South in Sewanee, Tenn., required retaining walls to be built around the courts, since there was not enough room to taper out from the site due to the close proximity of a neighboring golf course. Fill dirt was brought in to bring the courts up to grade, and the fence was built into the retaining wall.

When Hurricane Sandy hit the Connecticut coast, it ruined the six asphalt courts at Weed Beach Park in Darien. To guard against future storm damage, the new courts, in two batteries of three courts each, were raised by 2 feet and built with post-tensioned concrete engineered to withstand extreme weather. The grade was raised to allow runoff from the courts to pitch into the town storm drainage system. The project also included the backboard practice area. —Peter Francesconi